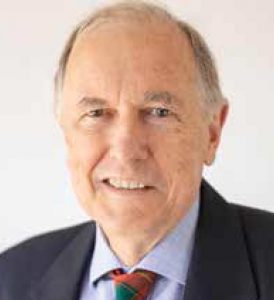 The 2022 Aberdeen Highland Games Chief of the Day is Ian McPhee, born in 1949, Ian is married and has two sons.

Following graduation from Wagga Agricultural College, Ian worked on an agricultural research station on Kangaroo Island. He later worked as an agronomist for a Sydney based fertilizer manufacturer before forming his own company specialising in horticultural services.

Ian has always had a wide variety of community and personal interests, including sporting clubs, politics, genealogy and public affairs. He is a life member of the Ross of Mull Historical Centre on the Isle of Mull in Scotland.

Interest in Scottish history and heritage goes back to Ian’s childhood when he attended a local police boys club to learn the bagpipes and was taught highland dancing. After a long hiatus, Ian took up the bagpipes with the Kiama Pipe Band and for many years thereafter played in a pipe band for Anzac Day marches, for highland games and other community functions.

Just over 40 years ago, Ian joined the Macfie Clan Society of Australia. He was president of the society for over 10 years and during that period edited the society’s journal The Downunder.
He produced literature for the society and represented Australia at two international Clan Macfie Parliaments which are held in Scotland every four years. Until recently, Ian was Clan Commissioner in Australia. He is currently the society’s chief historian and only armiger, having been granted his arms in 2016.

As a keen amateur historian, Ian has conducted historical research in numerous Australian archives and several also in Scotland. He has written and edited three books: The McPhees of Argyll published in 2010, a family history book; The Pioneering Jerilderie McPhees published in 2013 and a book about the highland clearances published in the UK last year titled The Naked Clansmen of Mull and Iona, 1700 – 1860.
In addition to publishing his own work, Ian has contributed his knowledge of Scottish history to other writers and researchers.